skip to main | skip to sidebar

(part of) You Are Here: Explorations in Search of Current Reality

My Blogs Why write 4 different blogs? Good question, but it seemed to make sense at the time. Most energy is going into The Real Truth Project

The Eisenhower Socialist ; The Real Truth Project ; What Was the Cold War? ; The Ontological Comedian

See also Tales of the Early Republic, a resource for trying to make some sense of early nineteenth century America.

What is Stimulus (or Keynesian Economics) About, in Plain English

Doesn't it make common sense that after several years of 20% of the population sitting on its hands, we'll be worse off in some fundamental way. Infrastructure decayed, people less educated, the nation having less intellectual property than we might have had?

The recession started getting well underway in 2001/2, and was masked for most of the Bush Admin by the building, refinancing, and home equity loan boom. We weren't creating true value, and our means (corporate structure, employee skills, capital other than building) were deteriorating, yet we convinced the world, including notably China, that our housing/building /land stock had magically become 50-100% more valuable. Construction jobs (and war related jobs), and some energy related industry (since the disruption in the middle east helped drive up the price of oil) grew, not much else, and China sent us boatloads of stuff on credit that we secured with our mortgages and 2nd mortgages. The recession didn't start when Obama came in, it didn't even start in 2007/8 under Bush -- it's been going on for 8 years only hidden by a rather pointless boom in building etc. And when that bubble burst, we were like Wiley Coyote having marched 20 feet beyond the lip of the cliff, and didn't start falling til we looked down.

What to do? For individuals, if you're 18-20 years old and can't get work, take out a student loan so you don't sit around missing the chance to gain work habits and losing what intellectual capital you have. If you have to borrow from a relative to buy the suit you need for a job interview or a cheap car without which you can't get to a place of employment, you'd be stupid not to.

It's not so different with the nation. If it lets 10-20 percent of the economy grind to a halt, then stuff decays and other stuff doesn't get built that could make the economy stronger in the future. Lay off teachers and the kids get dumber. That's called "intellectual capital". All sorts of capital deteriorates so we have less debt perhaps but a weaker engine with which to pay it off; quite possibly so much weaker that a few years out we have MORE debt than we would have had we invested (yes, might involve borrowing) in some way.
Posted by Hal Morris at 6:00 PM 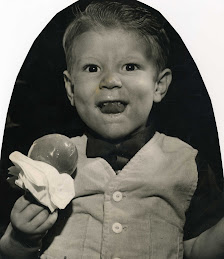